Raise your hand if you have a performer in the house.  You know the one, the one that's always center stage, dancing, putting on a show!  The ham of the house. Yeah, I've got one of those, and he's gonna LOVE when he starts his Theater Workshop next month with Theater in the Park.

Theater in the Park brings experience to young people in the world of theater. Our musical theater workshops are designed for children to develop skills in auditioning, performing and putting together a musical theater production.  In 13 Saturdays these young actors produce and perform a Broadway Musical in our own community of Severna Park, MD. Theater in the Park also offers vocal and acting classes as well as summer camp opportunities. The production staff is made up of experienced and trained performers and educators in that live in the Baltimore/Washington area.

My friend told me about this program for her daughter who was actually not the performer.  Her daughter was shy and struggled with speaking in front of people.  Theater in the Park has given this little girl not only the skills for speaking in public but confidence too!

Theater in the Park has four programs running this Winter:

These are both musical theater workshops that conclude with a full performance.

Pitch Perfect for Kids which is a vocal group that runs 8 weeks of rehearsal and then they perform on the 9th week at Union Jacks in Annapolis.  Ages 8  - 14

Dramatic Arts Workshop where kids work on acting skills and produce a straight play (no music) at the end of a 12-week session.  Ages 8 - 14 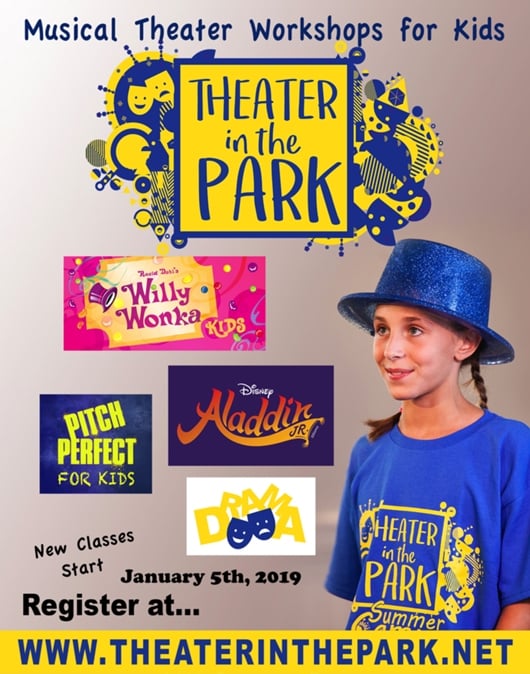